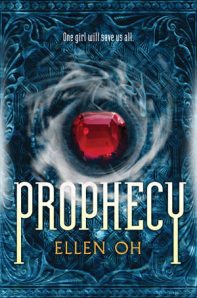 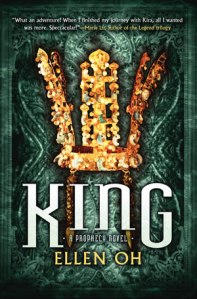 My Summary: The kingdom of Hansong and its neighbors are under attack by Yamato forces and demon hordes, led by the Demon Lord himself. An ancient prophecy foretells the arrival of a hero, the Dragon Musado, who will unite the Seven Kingdoms and defeat the Demon Lord by collecting the three sacred treasures. Kira, cousin and bodyguard to the heir to the throne, is gifted with special powers that allow her to sense demons. Although her priority is keeping her cousin safe for the future of the throne, she soon discovers that she has a great destiny of her own awaiting her.

I am honestly so happy this trilogy exists because there aren’t any others like it that I know of. An action-adventure fantasy YA story set in a Korean-inspired alternate universe? The moment I found out about it, I was like, “NEED.”

And Ellen Oh doesn’t fail to deliver. The series balances a fast-paced, quest-driven plot with character development and solid worldbuilding. The relationships between the characters stand out the most with me: Kira’s protective and loving relationship with her cousin Taejo; her part-affection, part-annoyance banter with her brothers; her supportive parents who believe in her until the last (*cries because I love supportive parents*), her cute friendship-turned-romance with Jaewon, her special bond with Nara (she is my favorite secondary character, I love her!), and her complicated relationship with herself and journey to accepting her own greatness.

At first I thought Kira would fall into the “I’m Not Like Other Girls and am misogynistic toward them because I’m physically strong and not stereotypically feminine” trap because it sounded like it at the beginning. I’m glad the series eventually proved me wrong with portrayals of women’s strength and bravery, combat-related or otherwise, a very showy subversion of the feminine/beautiful=weak/stupid trope, and Kira’s heartwarming friendship with Nara (I would read a whole series on Nara, to be honest).

I also appreciate how the romance panned out. No insta-love/lust, overdone love triangle, no glorification of assholery. Doubt and conflict, yes, but also mutual care and trust. YA needs more of this.

Also, my favorite snippet of dialogue from the entire series:

“Your hair is so short. Are you a girl or boy?”

Recommendation: Read it. It’s a quick read and a great escape from the monotony of mundane life. (Can you tell that I really want to be a swordsperson?)

P.S. The covers are gorgeous and I am forever disappointed that the version of King with the tiger silhouette didn’t end up on the final cover. When I was at the National Museum of Korea in September, I saw a crown almost exactly like the one on the cover of King and had to take a picture because why would I not?)

3 thoughts on “Review for The Prophecy Trilogy* by Ellen Oh”