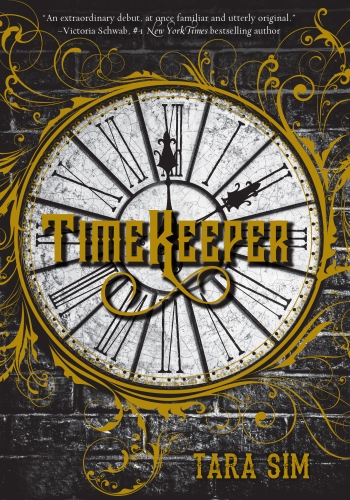 Note: I read this book as part of the #DiversityDecBingo reading challenge. You can find out more about it here.

My Summary: Danny Hart is the youngest clock mechanic of his time, in a world where clock towers not only tell time, they affect its flow and functionality. He’s also the survivor of a terrible accident involving an exploding clock tower, and his father is trapped in a town where time has Stopped due a clock tower being destroyed, so his job is more than just a way to earn money. When he is assigned to fix a broken clock tower in the town of Enfield, he expects the usual, routine repair. What he finds instead, is Colton, a cute clock spirit with more to him than meets the eye. Meanwhile, more clock tower explosions are happening, and there is suspicion of foul play. Soon, Danny realizes that the problems that are personal for him are actually tied to something far bigger.

It’s hard to find words to encapsulate how much I love this book, but I’ll make an effort to do it justice.

First of all, this novel manages to weave together so many genres and elements. It incorporates fantasy, mystery, and romance and does a wonderful job of balancing them throughout.

Fantasy is all about worldbuilding, and the great thing about fantasy is being able to play with the rules and norms of an alternate universe. Unfortunately, some authors’ imaginations stop short of changing the social norms and merely make cosmetic changes while replicating the real world’s systems and biases.

Tara Sim is not one of these authors. Her alternate Victorian England is not just a mirror of history with a small game of spot the difference. Rather, she has actively considered the implications of and evolved her England in accordance with the alternate history of her world. Not only is technology more advanced, the social landscape has been transformed as a result of those technological advancements.

Specifically, women have made gains in employment and can become mechanics, among other things. Homophobia is also much less virulent (yay). The social climate is far from utopian, as there are conservative factions and ideologies that persist in the face of these gains, creating an atmosphere in which acceptance and microaggressions coexist. This nuanced portrayal of the alternate social reality gives it a kind of realism that I rarely see in YA speculative fiction.

Aside from having an alternate history, the world of Timekeeper also has its own unique mythology that’s interspersed throughout the novel with the main narration. It doesn’t distract from the main plot. Instead, it adds another layer to the worldbuilding, explaining the origins of time as the characters experience it. I’m a major mythology nerd, so I might be a little biased, but I savored these passages.

A lot of writers who write historical/AU Victorian England whitewash it even though the reality wasn’t quite so white. Tara Sim includes racial diversity in the supporting characters, namely Brandon, who is black, and Daphne, whose father is half-Indian and is, like the author, white-passing. Moreover, they are not props; they are given their own stories and depth. Race isn’t sidestepped; for example, the author makes critical commentary on British imperialism in India through Danny’s perspective.

As for the mystery aspect, I got Sherlock Holmes vibes from Timekeeper. As in: murder and mayhem in the streets of London, and a dashing hero (Danny) out to solve the mystery. The suspense was intense, and the red herrings and twists kept me on the edge of my seat (bed?) throughout.

Now, for the romance. Danny and Colton are absolutely adorable together. Reading about their interactions made my heart flutter with joy or ache with sadness depending on the situation. That ship sailed pretty quickly for me, and if it sinks, my heart will go down with it.

Last thing: Danny has PTSD because of his accident, and I appreciate that this is not glossed over or minimized or omitted when convenient but rather incorporated into the story. I don’t have PTSD, so I can’t speak to the authenticity of the portrayal, but it at least matches the symptoms I’ve seen in my research. That aside, I definitely identified with Danny’s experience from the perspective of someone who has an anxiety disorder and has experienced panic attacks.

Recommendation: In my opinion, there is something for everyone in this book. Go read it now!

6 thoughts on “Review for Timekeeper by Tara Sim”