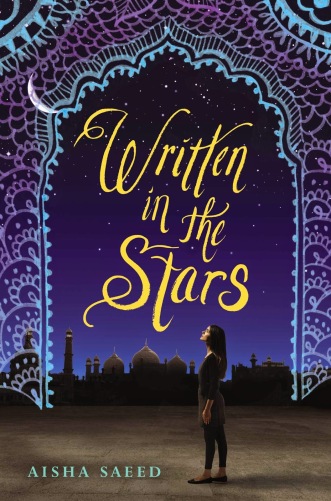 My Summary: Naila tries to please her parents, who give her considerable freedom in many ways. However, she breaks one of their strict rules about dating and boys by falling for Saif. When her parents find out that she has been dating him in secret, they decide to take her to Pakistan to “reconnect” with their roots. Unfortunately, their plans for Naila also involve forcing her to marry a man she doesn’t know. Alone and desperate, Naila must find a way to escape this nightmare.

Two different people I know had arranged marriages set up for them as early as middle school and high school (Indian American and Vietnamese American, respectively), so it’s not an exaggeration to say that this is a real issue for Asian Americans. Although arranged marriage span a diverse spectrum of experiences and not all arranged marriages end up terribly, this book highlights the extreme end in which there is undeniable coercion involved.

Aisha Saeed doesn’t pull the punches in portraying Naila’s struggles as a captive in her relatives’ and in-laws’ homes. The violence of coercion, the isolation, the bullying and abuse from in-laws, the feelings of helplessness–all of these are laid bare through Naila’s first-person narration. You are immersed in her world and her emotional reality, and it pulls you in.

However, despite these obstacles and limits on Naila’s freedom, she holds onto her agency. She resists, she plots and attempts to escape. She needs help, but she isn’t just a passive victim waiting to be rescued. Although multiple people tell her there is nothing she can do to change her situation, she continues to fight for her free will and control over her fate. That is what makes Written in the Stars an empowering story to me.

Another thing I appreciated about the book was the epilogue. It isn’t a fairy tale happily-ever-after type of ending; it addresses the repercussions of Naila’s traumatic experiences on her life. It reflects on the contrasts between Naila’s former expectations and the reality she faces, both the setbacks and the gains she’s had.

My only point of dissatisfaction is that I wanted more substantial and in-depth exploration of the aftermath of the climax. Healing from trauma is a long process, and being able to watch and experience that through Naila’s perspective would have been great and empowering in its own way.

Overall, I really liked this book. It tackled a very serious and underexposed issue in an informative and entertaining fashion. It humanizes people who are so often dehumanized by their environment.

Recommendation: Read this book! In our current political climate, it’s more important than ever to uplift the voices of Muslim Americans.