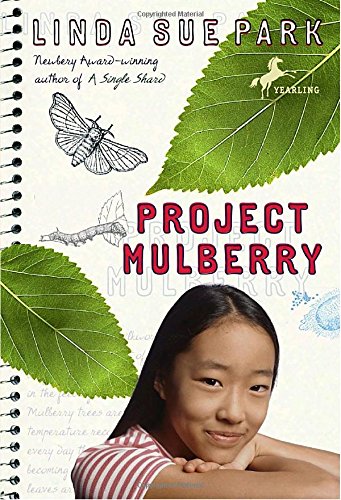 My Summary: Julia Song forms a team with her best friend Patrick with the goal of winning the state fair. Although she’s hoping to do something American for their project, Patrick convinces her to follow her mother’s idea of raising silkworms like her family did in Korea. The journey to complete their project presents unexpected obstacles and discoveries.

This book is an oldie but goodie. I first read it years ago, sometime around 2006 or 2007, because my younger sister had borrowed it from the library. It’s stuck with me because it was one of the first books featuring an Asian American protagonist that I’d read. Last year, I bought it and reread it.

To start off, let me just say that Julia has a very real voice. The narration is written in first-person, and I really felt like she was sitting there talking to me. Her personality showed clearly.

As you can probably guess from the summary, this books involves Julia digging into her Korean heritage a little. Although she’s not completely out of touch with her Korean background, nor is she actively wishing to be white, she’s still internalized certain ideas about what qualifies as “all-American.” She also lives in a town where her family is the only Korean family, so their differences stand out. This is why she’s initially turned off to the idea of the silkworm project, because she’s worried about being othered by her peers for doing a project that’s “weird” and Asian.

Over the course of the project, Julia learns a lot and takes us along for the learning, showing us the fascinating details of the laborious process of silkworm farming. Gradually, she starts to embrace the project and enjoy it, against her prior biases, and realizes that her Korean American identity is part of what makes her interesting.

Aside from this intrapersonal conflict, there is also an interpersonal conflict subplot regarding intra-POC tensions, specifically between Korean and Black people. Julia realizes her mother harbors antiblack biases through the way she talks about her Black teacher, Mrs. Roberts, and interacts with their Black neighbor, Mr. Dixon, who offers them access to his mulberry tree to feed the silkworms.

What results is a thoughtful exploration of implicit biases and how they affect interracial interactions. In Julia’s case, her mother’s uneasiness around Black people is given historical context; because Black soldiers fought in the Korean War, that was likely her mother’s first exposure to Black people, and it likely left a negative impression on her. Julia’s reflection on her own experiences with facing and perpetrating racial prejudice lead her to understand how even people with good intentions can be complicit in racism.

Aside from touching on race, this book also focuses on family and friendship and the conflicts that arise in those relationships. While some of the conflicts are resolved, some linger. It may not be the most satisfying end to some because of the unanswered questions, but the fact of matter is that some conflicts are ongoing processes. This is especially true when it comes to complex, systemic issues like race relations. Therefore, the somewhat open ending felt realistic to me.

The last thing I want to comment on is the “conversations” between Julia and Ms. Park in between each chapter. Not only did they contribute to developing Julia’s character voice and personality, they also provided a fun and informative window into the behind-the-scenes work of writing a book. They’re also potential jumping points for starting conversations about the themes of the book.

Recommendation: This book is kind of a classic, so go read it if you haven’t!