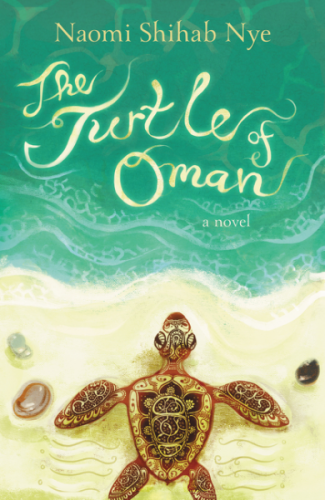 ]My Summary: Aref’s home is Oman, where his house and cat and friends are, where his beloved grandfather, Sidi, lives. He loves it there, and he does not want to leave it behind to move to Michigan, a place so foreign and far away for him. With Sidi’s help, however, he begins to see his journey in a new light.

This book wasn’t quite what I expected, but it surprised me in a good way. I think I sort of misread the blurb and thought it would chronicle the events that happened after Aref’s move, but in fact, the whole story takes place in Oman, while he’s preparing for the move to Michigan.

For the most part, this is a quiet story. There are adventures and high points, but a lot of the narrative is devoted to reflection and immersion in the rhythms of Aref’s environment. He spends some time resisting the idea of moving, but with Sidi’s guidance, he moves toward acceptance.

The relationship between Aref and his grandfather drives a lot of the story, and it’s very heartfelt. The two have a deep bond and shared interests that makes me envious because I was never close to any of my grandparents due to a combination of generational, cultural, and language gaps.

Although Aref is a third-grader, the narration doesn’t patronize him; it’s evident that he’s very bright and also curious. His love for learning and exploring is encouraged by his parents, who taught him a game called “Discover Something New Every Day,” which is their so-called family motto. Everyone in his family keeps lists of interesting discoveries, even his grandfather, though Sidi doesn’t write them down in journals. We the readers get to see some of these lists, which introduce us to everything from basic geographical facts about Oman, to the biology of turtles, to a short biography of Martin Luther King, Jr. Through these lists, we get a sense of Aref’s world and perspective, the details he notices and the topics that catch his eye.

I think the beauty of this book is the theme of looking at things more closely and from different perspectives and thus learning more. For Aref and his grandfather, nothing is too insignificant to be studied or too small to be a treasure. There’s a sense that you are opening yourself up to the wonder in the world as you follow Aref’s adventures. It helps take you away from the hectic flows of modern life to appreciate everything that’s around you. More importantly, the story teaches us to be more empathetic. Although at first Aref thinks only of himself and his situation, he eventually realizes that other people, people he knows, have experienced a similar move, and that he failed to consider their feelings in the past.

I liked the symbolism of the turtle, which is familiar to most and accessible to kids. It places change and moving in a broader context and timeline while paying tribute to the value of returning to one’s roots and homeland.

I can relate to Aref’s experience because I moved twice at a young age, once after third grade and again after fourth, both times from one state in the U.S. to another, the second time it was about 1500 miles (~2400 km) between the two houses. It was hard leaving behind everything that was familiar because I had taken so much of it for granted and couldn’t imagine adapting to a new environment. Reading this book transported me back to my own moving experiences.

Recommendation: Recommended for those in search of a heartwarming tale about saying goodbye to all that is familiar.