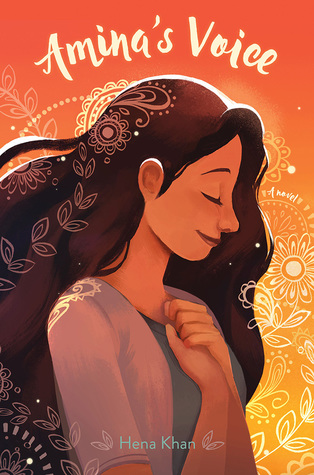 Note: This review is based on the eARC I received from Netgalley in exchange for an honest review.

My Summary: Things are changing around Amina. Her best friend Soojin is getting friendly with one of the “cool” girls and preparing to change her name to something “American”-sounding. Her uncle is coming from Pakistan to visit, and she has to be the perfect daughter or risk making her parents look bad. Then there’s the Quran recitation competition she has to participate in against her wishes and the Winter Choral Concert she wants to sing in but can’t find the courage to sign up for. While Amina struggles to be true to herself, tragedy strikes and shakes her community to the core.

While this book is primarily a “window” book for me since I’m not familiar with Pakistani culture, in some ways it was also a “mirror” book because I saw pieces of myself and my experiences in not only Soojin, Amina’s Korean American friend (there are a lot of commonalities in how East Asian Americans navigate white-dominated spaces), but also Amina herself because she is a second generation child of immigrant parents.

Both Amina and Soojin experience a variety of racist microaggressions from their white peers, from food-related taunts to language-related stigmas. Prominent among these is the butchering of their names, something that I’m intimately familiar with. Soojin, who moved to the U.S. as a toddler and is about to become a citizen, plans to change her name to something that white Americans can easily pronounce. I had a period where I considered changing my name, so I empathized with her situation, though hindsight makes me glad I didn’t go through with such a change. Amina feels off about this decision because she thinks Soojin’s name is fine as it is, so she does what she can to communicate this validation to Soojin. This was very heartening to read, knowing how strong the pressure to assimilate into the white mainstream can be and how vulnerable kids like Soojin are to these pressures.

In general, the friendship between Amina and Soojin was a highlight of the story. Two Asian Americans sticking by each other is realistic and an important kind of solidarity to represent. On top of that, the story explores how friendships change over time as new people enter your friend circles. In this case, the “interloper” is a white girl named Emily, who Amina doesn’t fully trust because of her history of perpetrating of some of the microaggressions I mentioned before. The distrust is mixed with feelings of jealousy and abandonment, and those feelings are addressed in a constructive way as the story progresses.

Another positive aspect of the story is Amina’s relationships with her various family members. Her older brother has his own character arc and development as he joins the basketball team at his high school and deals with both parental pressure and peer pressure. Amina may not fully understand her brother, but she is supportive of him and stands up for him to their parents when they are being hard on him over his grades (which is something I will never get tired of seeing portrayed in fiction because seriously, grades aren’t everything).

Amina’s relationship with her parents is also a loving and supportive one. They may be somewhat strict, but they are not unfair or uncaring. To the contrary, her parents encourage her, guide her through her problems, and keep her connected to her culture, heritage, and religion.

Her relationship with her uncle who’s visiting from Pakistan is a bit more complicated but dynamic. Her uncle is more traditional and conservative than her parents, so she has doubts about him liking her since she is Americanized in many ways. He becomes her tutor for reciting and learning Arabic from the Quran, and although she feels inadequate and self-conscious at first, she eventually begins to treat him more like a genuine mentor, developing a bond with him that also brings her closer to her faith.

One of my favorite things about this book was the depictions of everyday life at Sunday school and the Islamic Center. It’s such a lovely space that’s community-oriented and celebrates Islamic history and cultures with its displays and decorations. Everyone knows everyone else, and there are annual traditions and festivals that bring people together. You can tell that Amina feels very at home there. As I was reading about it, I couldn’t help but think of the Taiwanese Community Center that my family frequents on the weekends because of the similarities in layout and the feeling of comfort and familiarity it evokes for me. Since the story builds up this atmosphere of home around the mosque and the Center, the subsequent vandalism left a deep impact on me. The trauma of loss weighed on me as if it were real, as if I were Amina witnessing the events. Thankfully, the aftermath of this dark event lifts you back up with hopeful messages.

The title of this book, Amina’s Voice, has both literal and figurative meanings. The more literal interpretation is linked to Amina’s love of music and singing. She is talented but has stage fright and struggles to sing or otherwise perform in front of an audience. The more figurative meaning is about her coming to terms with herself and her identity and being comfortable with who she is. These two themes and struggles are intertwined and resolved over the course of the story in an empowering way. The ending was perfect (in my opinion).

7 thoughts on “Review for Amina’s Voice by Hena Khan”