Summary: Frances has many ideas for making fabulous dresses but no outlet to express her creativity. Through a stroke of good luck, she secures a job as a secret seamstress to Prince Sebastian. The prince wears the dresses Frances designs while going by the name of Lady Crystallia and quickly becomes a fashion icon in Paris, garnering recognition for Frances’ designs. Over time, the two become good friends and develop romantic feelings for one another. However, their happiness is threatened when they are pulled in different directions, Frances by her ambitions to work in a position where her name is known to the public, and Sebastian by their filial duty to marry as the royal heir.

When I first heard about the idea for this graphic novel and saw preliminary design sketches on Tumblr a few years ago, I was so impatient for it to be released. Now I’ve finally read it! If you saw my Goodreads review, it was basically me crying about my love for this book. Initial impressions aside, I have conflicting feelings about the book that I’ll elaborate on below.

The plot made for a great coming-of-age story, with the characters’ desires and growth at the forefront. I’ll admit I’m biased in being drawn to and loving the story because Sebastian is trans (there weren’t specific labels mentioned in the book, but genderqueer and trans femme seem to fit the best from what I gathered) and there are so few trans characters in YA. Watching Sebastian transition and become comfortable presenting as a girl was super heartwarming for me as a trans and genderqueer person. Frances’ arc in developing her creative/artistic talent was likewise relatable to me as someone who writes and draws and wants to be a published author. Jen Wang’s art style is a combination of cute and elegant and really makes the whole experience a visual treat.

It partially follows the template of a typical trans acceptance narrative. While Frances and Sebastian’s manservant have no problem accepting and respecting Sebastian’s gender from the beginning, the same can’t be said for other characters. Sebastian being closeted and fearful of rejection and disgust from their parents as well as the public drives the primary conflict in the story. This isn’t automatically bad, but it’s part of a broader trend of cis authors putting trans characters through some rough situations that aren’t always handled very well in execution.

TW: outing of a trans character

There is a scene where Sebastian is publicly outed by another character who pulls off their wig while they are presenting as a girl, which results in a confrontation involving the king and queen that is pretty emotionally devastating. My issue with this scene is that forcibly outing characters, especially as a humiliating spectacle, is really overused for dramatic effect by cis authors, who may not realize how hurtful the experience can be for trans readers. It happens so much that I am desperate for more stories where trans characters are able to come out on their own terms.

Conclusion: While the the characters are endearing, the art is lovely, the ending is a happy one all around, and the overall message is hopeful for trans/non-binary people, trans/non-binary readers who choose to pick this up should take care while reading in the second half since the outing/confrontation scene is potentially triggering.

I found this tag through Wendy @ What the Log Has to Say and it was created by The Book Loving Pharmacist.

Here’s the premise of the tag: Picture this, you’ve encountered a bubble or portal which, if you step through, can manipulate the time inside. With this, you can read all the books you want and when you step out of the bubble, no time has passed in the real world. You can finally make time for all those books you’ve been ignoring. So, now that you’ve stepped through the time bubble, answer the following questions:

There are a bunch of backlist titles that I’ve had on my TBR for well over a year that I really need to read. Here are a few series by Asian authors that I’ve been meaning to read.

Gates of Thread and Stone and The Infinite by Lori M. Lee

Dualed and Divided by Elsie Chapman

I want to reread His Dark Materials by Philip Pullman since The Book of Dust came out last year, and it’s been a really long time since I’ve reread the series. I own the omnibus edition pictured above.

Jade City by Fonda Lee. I want to read more adult fantasy since I’ve mostly stuck to YA. I’ve read and enjoyed Fonda Lee’s YA books, so I’m hoping Jade City will be my thing. 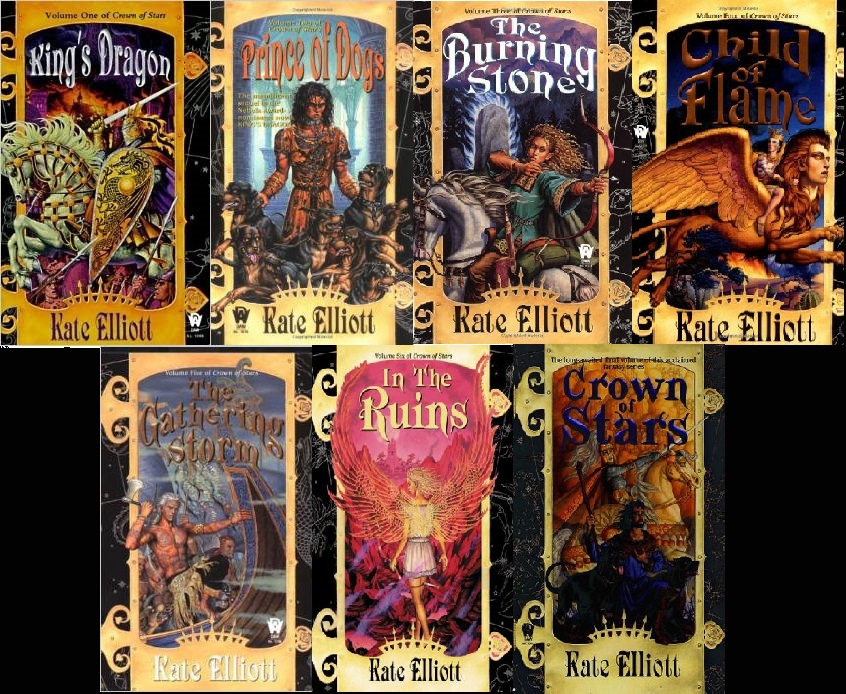 The Crown of Stars series by Kate Elliott. Each individual volume is massive and there are seven books total. 😰

The Queen of Attolia by Megan Whalen Turner. The way everything falls into place as the plot progresses is so beautifully done that I wish I could go back to experience that suspense for the first time again.

Coffee Boy, Peter Darling, and Caroline’s Heart by Austin Chant. I think it’s because they’re ebooks and I’m terrible about reading the ebooks I have.

Disclaimer: These are all of the ones I know of, not all of the ones that exist! Also if I’m wrong about any of the descriptions/categorizations feel free to drop a comment. Detailed synopses can be found by clicking the hyperlinks in the titles, which redirect to the books’ Goodreads pages. 🙂

And that’s the end! I do roundup posts like this bimonthly (I started in July 2017, skipped November-December 2017 due to lack of time/smaller volume of releases), so check back in late April/early May for the May and June releases. 🙂

These posts take a lot of time and effort on my part, and I’m not paid by anyone for the labor. If you have a little money to spare, you can donate to my ko-fi: www.ko-fi.com/theshenners.