I know I’m late, but here is the fourth and final interview for my Taiwanese American Heritage Week series, with Livia Blackburne, whose most recent book Rosemarked was one of my favorite reads of 2017. I’m dying for the sequel, Umbertouched, which comes out later this year (November 6th), but in the meantime, here’s a spoiler-free interview with Livia about Rosemarked and writing. 🙂

Synopsis of Rosemarked from Goodreads:

When Zivah falls prey to the deadly rose plague, she knows it’s only a matter of time before she fully succumbs. Now she’s destined to live her last days in isolation, cut off from her people and unable to practice her art—until a threat to her village creates a need that only she can fill.

Broken by torture at the hands of the Amparan Empire, Dineas thirsts for revenge against his captors. Now escaped and reunited with his tribe, he’ll do anything to free them from Amparan rule—even if it means undertaking a plan that risks not only his life but his very self.

Thrust together on a high-stakes mission to spy on the capital, the two couldn’t be more different: Zivah, deeply committed to her vow of healing, and Dineas, yearning for vengeance. But as they grow closer, they must find common ground to protect those they love. And amidst the constant fear of discovery, the two grapple with a mutual attraction that could break both of their carefully guarded hearts.

This smart, sweeping fantasy with a political edge and a slow-burning romance will capture fans of The Lumatere Chronicles and An Ember in the Ashes.

Q: In YA, we always talk about the concept of “strong female characters,” and in fantasy, these tend to be warrior-types who literally kick ass. In Rosemarked, your main female character, Zivah, is a healer rather than a warrior. What do you think makes her strong, and what do you believe a healer’s perspective brings to the story?

A: I’m glad you made that observation! Writing Zivah the way I did was a deliberate choice after writing Midnight Thief, in which the main character  Kyra was a more traditional type of kick ass heroine. And while I love Kyra, with Rosemarked, I started thinking about other kinds of strength. What are other ways to change the world, if you are not able to beat up everyone you meet? And so, there’s Zivah. Physically, she’s very weak. In fact, she’s very close to death. But she’s smart. She’s worked hard to gain knowledge, and she’s savvy about applying it. She’s also determined, loyal, and brave.

Q: The Rose Plague is a very distinctive illness in how it manifests. Did you base it on any real life disease(s)?

A: The broad strokes of rose plague were inspired by leprosy. In fact, one of the main inspirations for Rosemarked was a play about the Hawaiian leper colony at Molokai. I was struck not only by the biological aspects of the disease, but the social emotional aspect aspect. It’s bad enough to develop a terminal illness. How much worse is it to have to deal with that illness in quarantine, apart from your family and everyone you love? For the specific symptoms of rose plague, I borrowed from a whole bunch of different diseases. Rashes, of course, are very common disease marker, and I also included some flu-like symptoms such as fever and delirium.

Q: Although Rosemarked is a fantasy novel, there are aspects of it that I could tell were grounded in science. Was your science background (Biochemical Science and Cognitive Neuroscience) helpful in writing this book, and if so, how?

A: Well, I did a lot of research into the history of medicine to find inspiration for the healing techniques used in the story, and my biochemistry background helped out a lot with that. Also, the story centers around a memory potion. While that potion is strictly fantasy, it is based on real neuroscience principles of memory. For example, the potion takes away your personal memories and your knowledge of the world, but doesn’t take away physical skills such as the ability to use a sword. This is very similar to actual incidences of amnesia, where people might forget ever learning to play the piano but still be able to play a minuet.

Q: One of the central conflicts of Rosemarked and Umbertouched is the colonial occupation of Dara and Shidadi people by the Amparan Empire. Are any of these cultures based on real life cultures?

A: None of the cultures map directly onto a real world culture. When I decided I wanted to write an ancient empire, I did look at the Persian empire as an example of how an empire might be run in that kind of time, with that kind of technology. And some aspects of the Persian empire did make it into the Amparan empire. For example, the importance of roads for transportation and communication, as well as a very cool military technique that appears in Umbertouched.

On the other hand, Ampara differs from Ancient Persia in many ways as well. Most notably, the Persian empire was actually quite good to the people it subjugated, so much so that sometimes their armies were welcomed as liberators. Anyone who reads Rosemarked, however, knows that the Amparan empire is anything but merciful.

There is some Asian influence, especially in the landscape of Monyar peninsula. One of the early Amparan surgeries described in Rosemarked was based on a real technique used in ancient India. And here’s a random bit of trivia, the basic philosophies of the Shidadi and Dara people stem from two sides of a Facebook debate about safety, liberty, and government overreach that scrolled across my news feed after the Boston marathon bombing. I wouldn’t read too much into the story about my own political views though. The story goes where it will.

Q: Rosemarked is your sophomore series. Has your writing process for this series changed from when you were writing Midnight Thief, and if so, how?

A: Midnight Thief was the first novel I ever completed, and I really had very little idea of what I was doing. A lot of things, like character traits, or world building, I kind of improvised as I went along. With Rosemarked, I was a lot more deliberate about planning beforehand. I spent a lot more time on world building. I thought a lot about what I wanted the story to be like, what I wanted the characters to be like, and what I wanted that I asked to be. Basically, I built a much stronger foundation and it saved me a great deal of time in revisions. 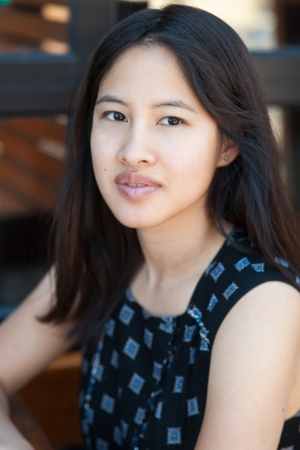 New York Times bestselling author Livia Blackburne wrote her first novel while researching the neuroscience of reading at the Massachusetts Institute of Technology. Since then, she’s switched to full time writing, which also involves getting into people’s heads but without the help of a three tesla MRI scanner. She is also the author of MIDNIGHT THIEF (an Indies Introduce New Voices selection), DAUGHTER OF DUSK, and ROSEMARKED (an Amazon best book of the month and YALSA Teens Top Ten Nominee).