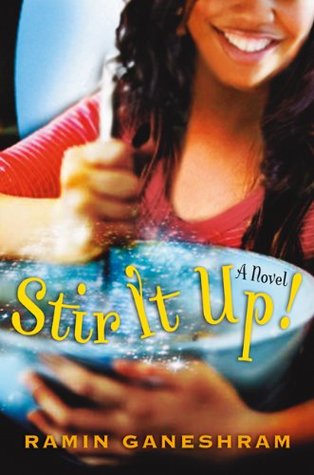 My Summary: Anjali loves cooking and dreams of having her own cooking reality TV show. However, her parents want “better” things for her, like getting into the elite Stuyvesant High School and working at a job that’s nothing like their humble family restaurant. When she’s accepted to a contest on the Food Network, she knows her father won’t approve, but she has plans of her own.

I love food, so the premise of this book drew my attention. A biracial, Afro-Indian Trinidadian girl from Richmond Hill, Queens, who wants to star in a Food Network show? Great. Unfortunately, I found the execution a bit lacking.

That’s not to say it’s a bad book. It had good elements: the centering of immigrants and POC in a story about Queens, the lovable grandmother character, the best friend who’s also a POC, the racially diverse supporting characters/show contestants, the commentary on the policing of race for people whose families have immigrated more than once, the incorporation of Indo-Caribbean food culture, and the lovely recipes that are sandwiched between chapters.

What was missing for me was substance. The writing felt too spare in many places. For readers who aren’t familiar with the ingredients and dishes mentioned in the story, it’s hard to imagine what they look like. The descriptions focused on lists of ingredients and how the dishes were prepared without much elaboration on the visual spectacle of the finished product.

And for a book that’s supposed to be about food, we get surprisingly few descriptions of smell or taste: aroma, texture, flavor, etc. Anjali spends an entire chapter at a cooking class but the actual consumption of the delicious food that’s made is crammed into a single paragraph with no details provided. Kind of anticlimactic, in my opinion. In short, I was hoping for a book that engaged my senses more.

On top of that, the plot felt a little too rushed without much downtime. There were 166 pages total, and 37 of those were recipe inserts, meaning all of the actual narrative was squeezed into about 130 pages, which is short even for a middle grade book. I wanted more build-up to and more elaboration during the contest scenes. That would have increased the emotional impact and overall weight of the story. I guess to put it another way, it felt like I was eating simple sugars when what I wanted was complex carbs. Wasn’t filling enough, I was still hungry when I was done.

Recommendation: Not sure what to say except maybe I’m not the right audience for this book? I think younger readers might be more forgiving.