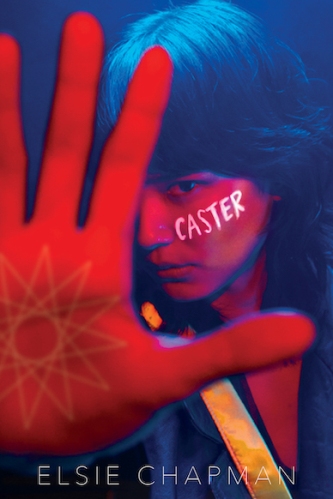 Disclaimer: I received an advance reader copy from the publisher in exchange for an honest review. My review is based on an uncorrected proof, which may be different from the finalized version that releases on September 3rd, 2019.

If the magic doesn’t kill her, the truth just might.

Aza Wu knows that real magic is dangerous and illegal. After all, casting killed her sister, Shire. As with all magic, everything comes at a price. For Aza, it feels like everything in her life has some kind of cost attached to it. Her sister had been casting for money to pay off Saint Willow, the gang leader that oversees her sector of Lotusland. If you want to operate a business there, you have to pay your tribute. And now with Shire dead, Aza must step in to save the legacy of Wu Teas, the teahouse that has been in her family for centuries.

When Aza comes across a secret invitation, she decides she doesn’t have much else to lose. She quickly realizes that she’s entered herself into an underground casting tournament, and the stakes couldn’t be higher. Real magic, real consequences. As she competes, Aza fights for her life against some very strong and devious competitors.

When the facts about Shire’s death don’t add up, the police start to investigate. When the tributes to Saint Willow aren’t paid, the gang comes to collect. When Aza is caught sneaking around with fresh casting wounds, her parents are alarmed. As Aza’s dangerous web of lies continues to grow, she is caught between trying to find a way out and trapping herself permanently.

I’m writing this review barely an hour after finishing, and my first thoughts after finishing were, “I need to go lie down.” I mean that in the best sense, by the way.

Honestly, whoever said urban fantasy is dead needs to take a seat and maybe read one by an author of color, which, in this case, means Caster. I read the entire book in a single sitting because the story grabbed me from the beginning and didn’t let go. It was incredibly fast paced and suspenseful, and I couldn’t put it down. There were many twists and developments that surprised me, and that ending really had me speechless as well as clamoring for more.

Although I was worried at the very beginning because I was dumped straight into an unfamiliar world with a lot of information hitting me, I quickly found my bearings and didn’t feel weighed down by the worldbuilding. According to the author, the story is set in a city based on Vancouver, and I was able to pick up on some of the clues to that in the way geographical elements were named as well as the presence of a substantial ethnically Chinese population. The way the author characterized the city was atmospheric and haunting, like the looming shadow of a very possible future brought about by climate change.

The magic system in this book was very distinctive and easy to follow. As the synopsis states, there’s a price to magic, both on an individual level as well as an environmental level. Using and overusing magic can take an incredible permanent–and even fatal–physical toll on the user as well as the earth itself, giving the magic-using characters’ actions a tangible sense of weight and consequence. The way magic and its aftereffects were described engaged of the senses, so I didn’t have any trouble imagining it in my head.

If I had to pitch this book using comp titles, I’d call it Warcross meets The Hunger Games. The heroine, Aza Wu, enters a high-stakes competition out of desperation to help her family and ends up in over her head. I was on the edge of my seat dreading the obstacles that would be thrown at her next and wondering how the hell she was going to survive them. Like both of the comp titles, Caster features special arenas for the competitions, but generated by magic rather than being real (Hunger Games style) or virtual reality (Warcross). It would be super cool if this book were made into a movie (*stares at entertainment companies*).

Aza, the protagonist, made for a fascinating character because of her willingness to take immense risks. I sometimes think maybe I’m a bit too impulsive for my own good, but watching Aza try to bluff and lie and gamble every step of the way, I wanted to scream because all of my danger alerts were going off. However, she isn’t just bold, she’s also smart and resourceful and mentally tough, so I never once considered giving up on her as a character.

Although the book isn’t primarily about Aza’s Chineseness, her cultural background still played a part in her story and her characterization in various ways. Her family owns a once-prestigious traditional tea shop that’s been passed down through generations and across continents, and her pride in this legacy is a contributing factor to the stakes of the book because she wants to keep alive the languishing business. In addition, while Aza isn’t perfectly obedient to her parents, she’s still very loyal to and considerate of them and how her actions might affect them and does everything she can to protect them, even if it’s to her own detriment. And among the main antagonists in the story is a Chinese gang with a deeply intertwined, albeit parasitic, relationship with the Chinese community of the city. Although the setting is fictional, it definitely draws on real histories and present realities where coethnics in diaspora both help and prey on one another.

Among the main themes of the book are revenge and power and whether they’re worth the cost. The experiences and decisions of different characters and the lasting effects engage with this question from different angles and made me think about what I’d do if I were in their position. So aside from being entertaining, this book is also a thought-provoking read regarding ethics on an individual and societal level.

In conclusion, if you’re looking for a dark, thrilling read with a strong heroine and vivid setting, Caster is a book to check out.